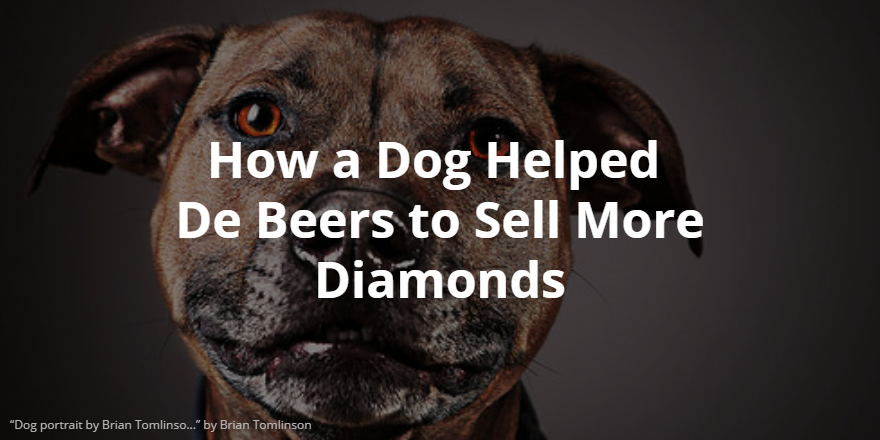 Did you know that a dog invented branding?

It wasn’t devised by an ancient sect of theologians, psychologists and savvy Greek business owners of luxury spas.

Branding was invented by a dog.

Allow me to explain…

If you’ve read Influence – The Psychology of Persuasion (and if not, add it to your list to Santa), you may know this story already.

Not for finding a cure to indigestion or for negotiating a peace settlement to end the Chile-Bolivian war, but for discovering that you could get a dog to salivate by rubbing meat paste on its nose and ringing a bell.

What Pavlov discovered was that it’s possible to implant an associative memory into the brain (a bit like Inception, I guess) that can be triggered with a recall cue.

In the dog’s case, the memory was the smell of meat paste linked to the bell, and the memory became so hardwired that just ringing the bell was enough to get the dog to salivate.

What’s this got to do with branding?

It turns out, people are as susceptible to mental cues as dogs.

It’s how advertising is supposed to work – bombard your audience with enough noise and messages and they’ll subconsciously reach for your brand on the supermarket shelf.

But mentally bullying your audience into submission, like it’s a war of attrition, isn’t the best way of selling.

Branding is at it’s most effective when the implanted memory is ‘salient’. This is a neurological term for important or relevant. When the message is salient you don’t have to repeat it so many times for it to be embedded into their chemical long-term memory (rather than short-term electric memory).

So how can you create a salient memory?

There are three keys:

Consistency – Focus on one core message.
Frequency – Contact prospects multiple times with your core message.
Anchoring – Implant a recall cue that triggers the memory of your message.

I can imagine you were nodding in sage agreement with the first two and then the mental brakes came on when you reached the third, correct?

So now you’re wondering why I’ve opened another question loop and how do you anchor a memory?’

The answer, dear Crucible reader, is to give the dog what it wants.

Pavlov’s dog salivated because it loved the smell of meat paste. You need to do the same with your audience.

To give you a less rolled out example, De Beers doesn’t sell diamonds.

People could care less about the cut, clarity and Karat weight. They care about the reaction they get from giving them to the person they love.

Give your customers what they want

Do the same in your copy – offer the customer what they want.

Talk about what they care about – their motivations, problems and dreams – to implant a salient memory.

Then when they actually need your client’s product or service, it will be their brand that pops to the forefront of their thinking.

It may have seemed an odd choice, but awarding Mr Pavlov a Nobel Prize is something us copywriters have a lot to be thankful for.

Disclaimer – I’d love for you to believe that I wrote this post off the top of my head, but all the information came from Dan Lok’s ‘Advertising Titans Volume 1’. As the name suggests, it’s packed with interviews with some of the biggest names in direct response copywriting, such as Joe ‘BluBlocker’ Sugarman and Bob ‘B2B’ Bly. So if, like me, you’re looking to up your direct response game next year why not buy it on Kindle, and save Santa the back strain.