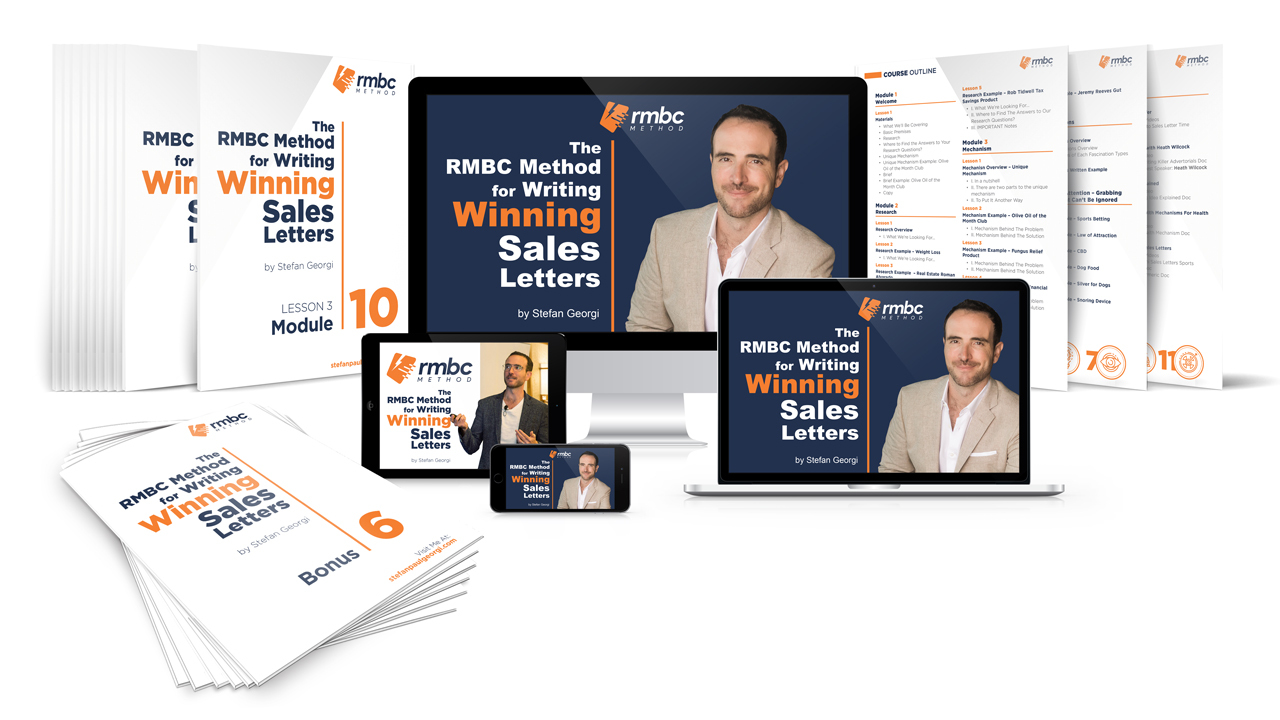 In my RMBC Method review I cover how it works and if it really can enable you to write high converting sales letters in 3 days, and charge $50k per letter.

Writing sales letters used to be an arcane art… shrouded in mystery.

Legendary copywriters would spend 4-6 weeks reading around the topic…

and sitting in a hut in a darkened forest…

until inspiration for the perfect headline struck.

Only then… and only then… would they consider putting quill to parchment.

Because, if the rumours are true, you don’t need to do any of that.

There’s a system that bends time and space to enable you to craft sales letters in as little as 3 days.

And no, I’m not talking about punching some keywords into a ‘Copy Robot’ for it to spew out something so jarring even Johnny 5 can’t make sense of it.

I am, of course, talking about Stefan Georgi’s RMBC method.

A step-by-step system for pumping out high converting copy in as little as 3 days.

Until now, you had to pay $34,000 to be a member of his elite Copy Accelerator group to get it.

Yet for reasons that defy the rules of capitalism…

He’s released it to the general public at a 97% discount ($997 for non-mathemagicians).

Who is Stefan Georgi? And how is he able to charge $50k for sales letters?

The first time I heard of Stefan Georgi was in an interview with 80/20 email copywriter Ian Stanley four years ago.

An interview in which he talked about cranking out multiple sales letters a month….

And I remember snidely thinking they must be total garbage (no doubt, to safeguard my ego because I couldn’t write that fast).

Well, fast forward to today and I stand corrected.

Because Stefan Georgi is fast becoming known as the hottest copywriter alive.

And due to these successes, he’s able to charge $50k per sales letter.

So he clearly didn’t release his RMBC method for the money.

As soon becomes clear when you go through it…

He did it due to his passion for the craft. And a genuine desire to help other copywriters up their game.

Something that becomes more obvious by the day, with all the extra bonuses he’s releasing.

The RMBC method is broken down into four stages:

For each stage you get a video in which Stefan runs you through his process.

You also get downloadable copies of all his notes and transcripts.

For each stage you also get 3-4 demonstration videos, in which you watch over Stefan’s shoulder as he puts his process into action researching and writing sales letters from scratch.

Stefan has also included videos of members of his elite Copy Accelerator Group (like Roman Alvarado, Joey Percia and Jeremy Reeves) as they also demonstrate how to use Stefan’s RMBC method to write high converting copy in record time.

Yet that’s not all…

You also get modules on:

Crafting Attention-Grabbing Leads That Can’t Be Ignored – After headlines, the most vital element is the lead. In fact, you can breathe life into flagging sales letters with a proof driven new lead. Stefan gives you examples for the CBD market, dog food and a snoring device you can use as inspiration for your own offers.

Writing killer headlines – As David Ogilvy famously said, 80% read the headline before they read anything else. So it’s THE most vital element to get right. Stefan shares his 6 step checklist for writing killer headlines, without having to write hundreds out (like we’re supposed to, but few people do).

Subject lines and Ad Creatives – Get a walkthrough on Stefan’s subject line matrix, and get some punchy subject lines for emails and presells in less time.

AOV Money Close – Find out how Stefan adds 20% or more to supplement orders. He provides his 7 steps to convincing people to buy the bigger pack, along with high converting examples on how it’s done.

And then there’s the bonuses… so many bonuses:

Bonus 2 – Advertorials with Health Wilcock. Get Heath’s exact process to writing presells that boost CTR and conversions, including his 6 go-to advertorial styles with examples to add to your swipe file.

Bonus 3 – Big Ideas Explains, and why a big idea is VITAL to sales success

Bonus 4 – Coming Up With the Mechanism for Health Offers

Because Stefan is continuing to record new videos answering people’s questions and get more bonuses done as we speak (including a bonus video on writing emails, by Natural Health Sherpa’s Jerrod Harlan).

Stefan is HUGELY active in the group right now. But that will likely change in the future as he gets drawn away to other projects.

So if you’d like to ask him questions and benefit from his experience of selling millions, check out RMBC Method right now.

RMBC Method Review – Does it REALLY make it possible to write a sales letter in 3 days?

The short answer is, yes.

There are plenty of top level VSL copywriters who vouch that they’ve written a sales letter in 3 days using the RMBC method.

The way Stefan has systemized the research phase, planning and how you structure your sales letter has made it a lot quicker to get your notes done and start writing.

These are ‘top level’ copywriters.

it’s unlikely what you write in 3 days is going to be oven ready.

Crafting high converting copy comes from the editing stage. And it can take a ton of drafts to get your words shipshape.

Stefan doesn’t directly teach you how to write in a compelling, persuasive way (although he gives you lots of tips).

But he DOES provide you with lots of examples you can use as inspiration on how it’s done.

So it would be a good idea to get some books on editing (Bond Halbert’s The Copywriting Method Part III is the best book I’ve read. And Scott Haines’ Shortcut Copywriting Secrets is great, if you can get hold of it).

So it may take you longer to write a compelling, high converting sales letter in 3 days.

But I think Stefan’s RMBC method will still dramatically cut down your time frame and the quality of your output, whatever level you’re at.

RMBC Method  Review – When can I expect to start earning $50k a sales letter?

It’s a nice thought, isn’t it…

that you need only spend $997 on a copywriting course and instantly be earning $50k a sales letter within months.

Life is never that easy (how dull life would be, if it was).

Stefan’s able to charge $50k due to consistently generating 1,000% returns for his clients.

Like I said, he had 7 of the top 10 best sellers on Clickbank at one point. And has generated untold millions for his clients in his career.

You can’t expect to be banking $50k per sales letter anytime soon (but I’d LOVE for you to prove me wrong).

Yet, what you can expect is to be generating significantly better conversions than you are now (unless you already consistently convert at 4-5%, in which case you have my respect)…

And with consistently higher conversions comes higher profits for clients…

Leading to you potentially making your $997 investment on the RMBC Method back many times over.

In fact, the bonus on writing advertorials alone is worth the price of entry.

Because you can use what Heath teaches you to be charging $1,000 for a presell in little to no time (a $3 profit!).

There are people in the private Facebook group now using the RMBC Method to write newsletters, speeches and video documentaries.

So it’s a multifunctional system for writing highly engaging messages in lots of different formats.

Even if you’re a B2B copywriter, writing case studies and brochures, I think you could get a ton of value from Stefan’s videos on big ideas, mechanisms and headlines.

Stefan doesn’t offer a money back guarantee. So only get it if you’re serious about putting it into action and going after higher paying clients.

So if those are in your wheelhouse, go get The RMBC Method post-haste.

And RMBC Method offers the best ROI by a looooong shot.

And the golden ticket to writing high converting copy that can rapidly raise your fees.

In fact, in the future, if anyone asks to write for me I’ll be advising them to go through the RMBC Method… create a sales letter… run traffic to it… and get some sales.

But shoot… if you’re able to do that you never need to write for me or anyone else ever again.

So here’s the bottom line…

It’s a journey that never ends.

Yet the RMBC Method gives you a rock solid foundation on which to build.

And it shows you what it takes to research topics, assemble copy and  perform at the highest level.

Like I said, you previously had to pay $34,000 to be in Stefan’s Copy Accelerator group to get it.

So if I was you, I’d go get the RMBC Method before Stefan pushes up the price or withdraws it from sale altogether to protect his own $50k per sales letter fees.

Earnings disclaimer – All the links to Stefan’s RMBC Method are affiliate links. But if you’re a regular reader, you’ll know I don’t post reviews very often (mayone one or two a year). I’ve paid my own good money to get it. And I think you should too.