In continuation of last week’s post on why copywriting shouldn’t be rushed, I’m going to don my psychologist’s hat to assess the reason why.

Why do our eureka moments occur when relaxing in the bath, going for a walk or lying in bed? Why can’t we find inspiration at will?

Well, it’s all to do with brain waves.

According to scientific research, our thought processes are divided into four main categories:

Beta – main state of mind when we’re alert, but can also be agitated or anxious.

Alpha – a state of relaxation without the loss of awareness when our brain’s are at their peak level of concentration.

We spend most of our days stuck in beta, battling with the stresses and strains of everyday life. When in this agitated state, our brains can’t run free, and are trapped thinking inside the box.

The mental plane upon which we can focus all our creative energy and conjure new ideas is alpha.

Reaching the state of alpha cannot be done at will. You have to be able to relax and slow down your brain waves from beta’s more frantic rate to a mellow level. When calmed, our brains can concentrate at their peak, attain inspiration and feed you with the creativity for composing your finest killer copy.

The science on brain waves supports the idea that creativity cannot be attained from four cups of coffee whilst chained to your desk. Caffeine is, in fact, believed to be counterproductive to creativity because it speeds up your brain and sticks you straight into beta gear.

Great if you want to hammer out as many lines as possible.

Not so good if you actually want to be able to fine tune your words.

Creative types are also believed to have slightly different brains. Not disproportionately larger, as some might like to believe, but driven more by the left side and able to generate the bursts of alpha waves needed for inspiration.

High achieving sports stars are believed to have the same brain type. When Tiger Woods hits 36 foot putts or David Beckham is launching inch perfect free kicks, they’re both generating bursts of alpha waves that enable them to concentrate at their peak without getting anxious or agitated.

So, when William Wordsworth went for 20 mile walks and Einstein took his mid-afternoon naps they weren’t doing it to avoid work. But because it was at these times that their thought processes were at their most lucid.

“Don’t think you will be doing less work because you sleep during the day. That’s a foolish notion held by people who have no imaginations. You will be able to accomplish more. You get two days in one — well, at least one and a half.”

After writing this week’s post, I don’t feel so guilty about taking breaks, and feel even more relieved at escaping the beta lifestyle of the corporate world.

I think it’s going to be decaff for me from now on as well. 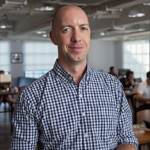 12 thoughts on “Why Creativity and Good Copywriting Comes in Waves”